Congratulations to the 2020 Distinguished Alumni winner 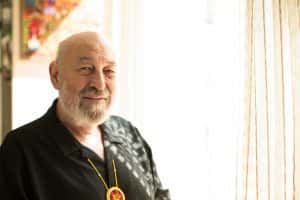 Dr.  Ryser is the founder and CEO of the Center for World Indigenous Studies (CWIS). The CWIS is a global community of activist scholars advancing the rights of indigenous peoples through the application of traditional knowledge through activist scholarship. Dr. Ryser is internationally recognized as the principal architect and spokesperson of theories and principles of Fourth World Geopolitics.

Dr. Ryser credits his Union doctoral degree for giving him the courage of his convictions.

“Union opened doors that had long been closed to my world in Indian Affairs. Union’s doctoral program was a breath of fresh air. With the support and help of my mentor, Dr. Marjorie Bell Chambers, I was given the freedom to explore and explain what I had for 25 years observed in relations between Indian Nations and the United States—what I later dubbed “Fourth World Geopolitics.” My book, Indigenous Nations and Modern States published in 2012 is a direct product of my studies at Union and I am thankful for the Union’s commitment to the principle “application of theory and practice.”

Ryser’s efforts have resulted in stronger tribal governments in Canada, the United States, and Australia, and the establishment of new tribal governments based on historical traditions with tribes in Iraq, Syria, Turkey, Palestine and Iran, Nigeria, Mexico, and Kenya. His work was instrumental with many other Indigenous Peoples’ leaders in the development of treaty language concerning Indigenous Peoples in the Convention on Biodiversity, and protocols for the United Nations Framework Convention on Climate Change. He drafted key language for international resolutions adopted by the World Council of Indigenous Peoples in the topic areas of transnational corporation extraction of raw materials from indigenous peoples’ territories and worked in support of the Miskito, Sumo, and Rama nations to negotiate the early stages of a peace agreement with the Nicaraguan government.

His mother instilled fierce pride in his heritage.

“My mother was powerfully influential in the development of my career from my earliest years,” said Dr. Ryser. “She revealed that my ancestry extended to the Cree, Oneidas, and Waskarini in what is now southeastern Canada—my true heritage. I grew up in the Cowlitz Culture, but that only came about because my mother and her sisters wanted us (my brothers and sisters) to have a connection to an Indian Community. She knew that her relatives arrived in Cowlitz Country in 1841 on a wagon train that took a year to travel from Red River village on Hudson Bay through to the west and dropping down into the Columbia River Basin and then across to Cowlitz Country.”

The pivotal moment that signaled he would have a life of research, investigation, negotiation, communication, and consultation with indigenous leaders and with their interlocutors took place at an Affiliated Tribes Meeting when Dr. Ryser was a first-year college student.

“I was in a room with other young Indian people. An elder approached us from the bigger meeting and asked, ‘Who here can write in English?’ I raised my hand and he quickly scooped me up. While we were walking toward the bigger meeting, he said, ‘I want you to listen to what we say in front of the meeting and write down our words. Then give the paper to those guys over there (U.S. government officials in the back of the room).’ I realized that the task given to me was very important to communicate between Indian elders and U.S. government officials. It turned out I would translate “English into English.” I had to listen, learn, translate, and then communicate. That is when I realized the importance of this role that later became the basis for my work before, during and after the doctoral program at Union.”

Dr. Ryser was nominated for the alumni award by fellow Union alumna, Dr. Leslie Korn, MPH, LMHC who graduated with her Ph.D. in1996, concentrating her work in Behavioral Medicine. She too has had an illustrious career as a renowned integrative medicine clinician and educator specializing in the use of nutritional, herbal, and culinary medicine for the treatment of trauma and emotional and chronic physical illness. Dr. Korn remembers their first meeting.

“We were at a colloquium cohort meeting of about 20 doctoral candidates in 1994. His quiet and humble style coupled with his thoughtful, measured responses made an impression on me. He illuminated a problem, proposed theories and responses, and above all every one of his responses to his colleagues as they presented, offered intellectual substance, delivered gently, so it could be digested and applied. Later when he and I talked about our work during breaks, I discovered that his work among indigenous communities and in American Indian affairs was very similar to my own work in indigenous communities in rural Mexico. We were also both authors and while his work was in international relations and mine in behavioral medicine, we envisioned collaborating on a number of projects.”

Dr. Korn explains his influence this way. “He is known for his commitment to mentoring students as future leaders and activist scholars. He has had a significant influence on countless students and interns since he graduated from Union. Each of them, whether teachers, professors, lawyers, or diplomats, has experienced a shift in their intellectual axis as a result of learning from Dr. Ryser.”

Dr. Ryser is humbled and surprised by the award.

“I am thankful for Union’s commitment to the principle of “application of theory to practice.” In the organization I created to advance the healing arts and sciences and Fourth World Geopolitics through the application of traditional knowledge, we say: we do this work through activist scholarship.”

Today is the day to explore how a Union degree can change your career path.