Congratulations are going out from all corners to Dr. Don Mee Choi (Ph.D. 2003), poet and translator, on being named the winner of the 2020 National Book Award for Poetry.

Her collection, “DMZ Colony,” explores lives affected by colonization and war and is described as “a collage of survivor accounts, prose, and quotations with photographs and drawings that takes its name from Korea’s Demilitarized Zone.” 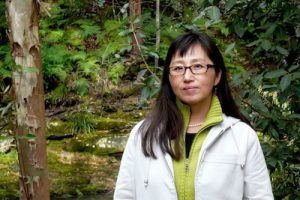 Choi, born in South Korea and now based in Seattle, deftly explores the histories of South Korea and the United States via her return from the U.S. to South Korea in 2016. Powell’s City of Books reported, “Woven from poems, prose, photographs, and drawings, Don Mee Choi’s DMZ Colony is a tour de force of personal and political reckoning set over eight acts. Like its sister book, Hardly War, it holds history accountable, its very presence a resistance to empire and a hope in humankind.”

In an emotional speech at the virtual awards ceremony on November 18, Choi dedicated the award to her father, a photojournalist. “Poetry and translation have changed my life,” she said. “For me, they are inseparable.” (Source: Youtube.)

“Don Mee earned her Ph.D. from Union Institute & University in Modern Korean Culture and Translation, with a distinguished essay on and translation of modern feminist Korean poets. In addition to the National Book Award, she recently received a Whiting Writers Award, another note of honor in the poetry world, and has received many other awards since her Union days.”

The highly prized National Book Award for Poetry is one of five annual awards given by the National Book Foundation to recognize outstanding literary work by U.S. citizens. They are awards “by writers to writers,” with nominations provided only by publishers. Dr. Pratt noted that Don Mee’s books have all been published by small experimental presses, rather than larger houses.

“She set her path clearly when she defined the work she wanted to do when she was at Union,” continued Dr. Pratt, “and she has followed it faithfully and brilliantly. It is gratifying to see her reaping this national recognition.”

You too can follow your dreams with a UI&U Ph.D. program that incorporates interdisciplinary study. Learn more at this link.