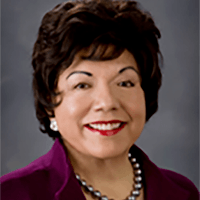 Josefina Baltodano is currently serving at UC Berkeley as Senior Associate – External Relations of the Center for Studies in Higher Education and Founding Executive Director of the Executive Leadership Academy (ELA). ELA is a multi-day program designed to provide insights and experiences that will be useful to persons who are interested in moving to high-level university and college leadership positions, such as provosts, presidents, and chancellors. The ELA Alumni Network is made up of 321 individuals who come from 35 states and 10 countries.

Previously, she served as President of Marian University until 2009. During her presidency, she led the transition from a college to university status.  She served on the Higher Education Resource Services (HERS) Board of Directors, the University of Wisconsin System President’s Council on Diversity, the Alta Bates Summit Foundation Board, and the Board of Directors of the American Council on Education (ACE) Women’s Network Executive Council. She also served as Chair on the Board of Directors for the Alameda Health System Foundation, while simultaneously serving as the Campaign Chair. In honor of her exceptional service, Josefina was chosen as the 2017 recipient of the Outstanding Fundraising Volunteer Award from the Association of American Fundraising Professionals, Golden Gate Chapter.

Under her outstanding leadership as Campaign Committee Chair, the Alameda Health System Foundation received the largest institutional gift and the largest bequest in its history.  Greatly surpassing the original goal, she spearheaded the capital campaign that supports the vital services and programs for the Alameda Health System. Through Josie’s dedication to providing world-class health care to all members of our community, she serves as a shining example of a philanthropist with a driven mission of bettering her community.

Baltodano also served as a Commissioner for the American Council on Education Women’s Commission, the State of California Student Aid Commission (CSAC), and served on the Mills College Board of Trustees. She served as a key member of the Executive Committee and helped to support important initiatives which assisted in setting the standard for quality liberal arts education for Mills College. In her almost a decade on the board of trustees, she demonstrated her dedication to women’s issues and served on a capital campaign that greatly surpassed the intended goal. Baltodano was also the founding chair of the Board of Commissioners of the International Assembly for Collegiate Business Education and was also the National Chair of the U.S. Department of Education’s Ronald McNair Post-Baccalaureate Achievement Program.  Finally, Josefina is proud to share that her first two major non-profit boards were when she served on the Board of Directors for KQED and on the Board of Trustees for the San Francisco Ballet, assisting both in their fundraising campaign initiatives, which exceeded their goals.