A leader in higher education 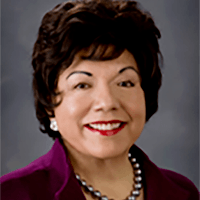 Josefina Castillo Baltodano J.D. is an internationally recognized leader in higher education. Most recently the book she has co-authored with Nancy Archer-Martin, Opening Doors: The Higher Education Leadership Playbook, is being published this month. She currently serves at UC Berkeley as Senior Associate – External Relations of the Center for Studies in Higher Education and Founding Executive Director of the Executive Leadership Academy (ELA) and is a Union Institute & University Board of Trustee.

Baltodano is also aware of the statistics and obstacles Hispanics face in higher education degree attainment. The Pew Research Center states that Hispanics are the largest minority group in the country and project that by 2050 Latinos will be almost one-third of the U.S. workforce (not to mention the country’s tax base). Yet Hispanics lag far behind in degree attainment despite the U.S. Bureau of Labor Statistics predictions that most jobs in the coming years will require at least some college education.

Baltodano is an authority in higher education and has a driving passion for degree completion for Hispanics, women, and other underrepresented groups. In recognition of National Hispanic Heritage Month she shares her insights into Hispanic higher education in the Q & A below.

Research data demonstrates that having a higher education degree assists Hispanics in having more opportunities available to them over the span of their life and allows them to earn a higher wage; increased opportunities with higher pay directly increases the upward mobility of Hispanics.

Many cannot attend universities or colleges simply because the financial burden it places on the individual and/or their family. Through lessening the financial impact on the individual, we are able to increase access to a higher education. Financial aid and federal loans need to be expanded, and more scholarships should be made available at both public and private universities.

The Hispanic population in this country is very broad and complex; it is a combination of different cultures from different countries. A multicultural, multiethnic fusion represents a variety of people, cultures, and countries.

National Hispanic Heritage Month is a time to celebrate the rich heritage of Hispanic Americans by recognizing the histories, cultures, and contributions of Americans whose ancestry includes Spanish, Mexican, Caribbean, and Central and South American heritage. This year’s theme is “ESPERANZA: A CELEBRATION OF HISPANIC HERITAGE AND HOPE.”

Josefina Baltodano is currently serving at UC Berkeley as Senior Associate – External Relations of the Center for Studies in Higher Education and Founding Executive Director of the Executive Leadership Academy (ELA). ELA is a multi-day program designed to provide insights and experiences that will be useful to persons who are interested in moving to high-level university and college leadership positions, such as provosts, presidents, and chancellors. The ELA Alumni Network is made up of 449 individuals who come from 37 states and 10 countries. Baltodano was highlighted in Diverse: Issues in Higher Education in the “Top 35 Women in Higher Education” in 2019.

Previously, she served as President of Marian University until 2009. During her presidency, she led the transition from a college to university status.  She served on the Higher Education Resource Services (HERS) Board of Directors, the University of Wisconsin System President’s Council on Diversity, the Alta Bates Summit Foundation Board, and the Board of Directors of the American Council on Education (ACE) Women’s Network Executive Council. She also served as Chair on the Board of Directors for the Alameda Health System Foundation, while simultaneously serving as the Campaign Chair. In honor of her exceptional service, Josefina was chosen as the 2017 recipient of the Outstanding Fundraising Volunteer Award from the Association of American Fundraising Professionals, Golden Gate Chapter.

Under her outstanding leadership as Campaign Committee Chair, the Alameda Health System Foundation received the largest institutional gift and the largest bequest in its history.  Greatly surpassing the original goal, she spearheaded the capital campaign that supports the vital services and programs for the Alameda Health System. Through Josie’s dedication to providing world-class health care to all members of our community, she serves as a shining example of a philanthropist with a driven mission of bettering her community.

Baltodano also served as a Commissioner for the American Council on Education Women’s Commission, the State of California Student Aid Commission (CSAC), and served on the Mills College Board of Trustees. She served as a key member of the Executive Committee and helped to support important initiatives which assisted in setting the standard for quality liberal arts education for Mills College. In her almost a decade on the board of trustees, she demonstrated her dedication to women’s issues and served on a capital campaign that greatly surpassed the intended goal. Baltodano was also the founding chair of the Board of Commissioners of the International Assembly for Collegiate Business Education and was also the National Chair of the U.S. Department of Education’s Ronald McNair Post-Baccalaureate Achievement Program.  Finally, Josefina is proud to share that her first two major non-profit boards were when she served on the Board of Directors for KQED and on the Board of Trustees for the San Francisco Ballet, assisting both in their fundraising campaign initiatives, which exceeded their goals.

Baltodano currently serves as a Board Member on the UC Berkeley Library Board, as well as the Union Institute & University Board of Trustees and the Alameda Health System Foundation Board. She also serves as a High-Performance Executive Coach and Senior Principal at Archer Martin and Associates, and presents on the following topics: CV, cover letter, and interview techniques, transitional leadership; enrollment management; fundraising; board relations; community engagement; and entrepreneurial initiatives.

Union is a global leader in providing higher education degrees for the adult learner. Your Goals. Your Success. Your Union. We’ve Got U!  Click to learn more.