Welcome to Authors of Union, highlighting our many published authors who are transforming lives and communities.

Fields of Poison recounts the odyssey of Antonio Velasco from a village in rural Mexico to a life of backbreaking labor as an eleven-year old migrant farm worker in America. With determination, foresight, and overwhelming intellect he rose to the heights of the scientific and medical professions. Major corporations fought Dr. Velasco’s determination to investigate and prevent life-threatening pesticide poisoning. Against enormous odds, he developed diagnostic protocols and treatment of toxic pesticides that have a long-term impact on public health. Dr. Velasco’s story represents the American ideal that the nation benefits from generations of immigrants. (Source: Amazon)

In Search of Appalachia

Alumna Nancy Brown Diggs is a scholar, author, lecturer, and world traveler. She has visited every continent, lived in France, participated in language immersion/homestay programs in Japan and Mexico, and volunteered in Ecuador, Romania, and Haiti. 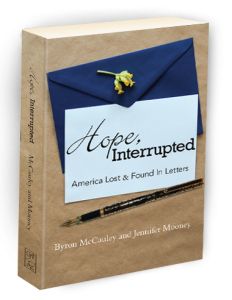 In Hope Interrupted, Mooney, a Jewish woman who grew up in the North, and McCauley, a Black man who grew up in the South, combine their disparate childhoods to explore what it means to be an American and what the future holds for their offspring and the next generation. It reflects upon what their own ancestors may have envisioned decades earlier. This includes reflections and introspection of their own lives aligned with a world experiencing a full-blown crisis.

Written during six months of COVID, a failing economy, Black Lives Matter and political unrest, their narrative concluded on November 3, 2020 (USA Election Day). They revisited their premise and the state of the nation again three months later. Their sense of optimism, hope and perseverance speaks truth to individuals with family challenges, aging parents and a battle cry that calls out to anyone who has questioned the fragility of life.