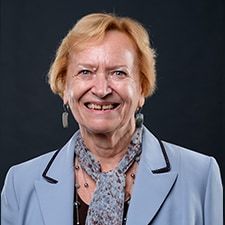 Ms. Christine van Duelmen was appointed to the Union Institute & University Board of Trustees in June 2004.  Ms. van Duelmen comes to the Board of Trustees with considerable expertise in adult and life-long learning for working professionals, which is an area of great interest to many UI&U students and alumni.

Ms. van Duelmen is executive director and conference coordinator for the International Council for Innovation in Higher Education, an international network of universities, administrators, scholars and organizations concerned with new developments in higher education.   She also works as a consultant specializing in adult on-line education.

Ms. van Duelmen served as executive vice president and registrar at the Canadian School of Management in Toronto, Canada, where she held several positions since 1980, including professor of tourism marketing and management. Prior to her work with that prestigious institution, she served as tourism and travel coordinator and instructor for Ryerson Polytechnic Institute (now Ryerson University) in Toronto, Canada, and as a foreign languages instructor at West Seattle High School in Seattle, Washington. In addition, Ms. van Duelmen served as senior travel consultant and assistant manager of Park Travel Limited in Toronto.

Ms. van Duelmen earned her B.A. at McGill University in Montreal, Canada; M.A. at University of Washington in Seattle, Washington; Executive F.B.A. at the Canadian School of Management in Toronto, Canada; M.B.A. at University of King’s College in Toronto, Canada; and received an honorary D.B.A. from International University of America in San Francisco, California. She took post-graduate studies at the University of British Columbia, and she is a certified master teacher.  She is a member of the Canadian Institute of Certified Administrative Managers, Pacific Area Travel Association, Caribbean Tourism Organization, and Canadian Institute of Travel Counselors.