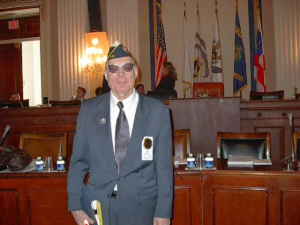 Bob Smith at the U.S. Capitol testifying on behalf of veterans.

Alumnus Robert L. Smith, III (Ph.D. ’86) received the honor of a lifetime when he discovered his brother dedicated his latest book to him.

“I was surprised. I had no idea,” Bob said. “The inscription reads, ‘To my brother Bob, who has kept the faith’. That is a wonderful recognition.”

The publication, The Last Gentleman Thomas Hughes and the End of the American Century, written by Bruce L.R. Smith, Ph.D., tells the story of Tom Hughes, Director of the Bureau of Intelligence and Research during the Kennedy and Johnson administrations and president of the Carnegie Endowment for International Peace. Through the eyes, diary, and notes of a key participant, the book provides a contemporaneous perspective on such major events as the Bay of Pigs fiasco and the CIA’s Operation Mongoose against the Castro regime, the Cuban missile crisis, Vietnam, and the elections of the 1960s. This book is a firsthand, behind-the-scenes account of the people who dealt with the great issues and made critical life-and-death decisions for America during the cold war. (Source: Amazon review)

Born and raised in Minnesota, the two brothers have always been close.

“Bob took a special interest in my work for the book from the start,” Bruce explained. “His enthusiasm, support, and advice kept me motivated. We traveled to many historical sites and archives to research Hughes’ life and those of his ancestors. He also secured a grant to keep the research going.”

That is not the reason Bruce dedicated the book to Bob, he wanted to show his appreciation to his older brother.

“The dedication was a way to show my respect and appreciation to Bob for all that he has done for me and our family,” Bruce said. “He is a beacon of strength. The stalwart of the family.”

The brothers took different career paths. Bob’s career was in the investment field, teaching, human resources, and as a neutral arbitrator in labor management.

“My Union degree pointed me to public service and organizational development. I may be one of the few Union students who wrote two dissertations,” Bob said.

Bob is also the founder of the Gopher State Politics Institute. He has a strong passion for promoting a fiscally responsible tax policy for Minnesota residents and businesses. After seeing generations of Minnesotans exiting their home state for more favorable tax environments, Bob founded the Institute. He is a veteran and a strong advocate for all our nation’s veterans. Bob spends countless hours volunteering in support of Veterans. He is a prior national president of the Blinded Veterans Association (BVA).  In addition to his duties at the Institute, Bob is also active in leading the BVA for the Midwest region.

Bruce is a retired professor of political science at Columbia University and a senior staff member at the Brookings Institution. His work has been in the fields of American politics, American foreign policy, and the impact of science on public affairs. His previous books include Lincoln Gordon: Architect of Cold War Foreign Policy; Closed Minds? Politics and Ideology in American Universities (with J. D. Mayer and A. L. Fritschler); The Advisers: Scientists in the Policy, American Science Policy Since World War II; and The RAND Corporation: Case Study of a Nonprofit Advisory Corporation.