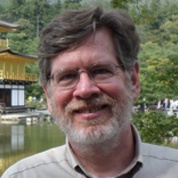 Elden Golden, PhD, JD, joined the faculty of Union Institute & University in 2007 and was appointed Director of the Master of Arts Program in 2016. In addition to his administrative duties, he regularly teaches in the Creativity Studies major of the MA program and the Humanities and Culture major of the PhD in Interdisciplinary Studies program.

He holds degrees in music theory (BA, MM – Colorado State University), law (JD – University of Kentucky) and humanities (MA, PhD – University of Louisville). After practicing law for nearly twenty years he returned to school as an adult student to work on his humanities degrees. His creative dissertation for the PhD included a twenty-minute ballet on the subject of the Burghers of Calais for which he wrote the scenario and composed the music. He has published in the fields of music composition, humanities, and law. His research interests include the history of creativity, particularly the eighteenth century, and the relationship between opera and culture. In furtherance of these interests, he has presented papers at conferences devoted to literature, theater, popular culture, creativity, eighteenth-century studies, philology, and the humanities.