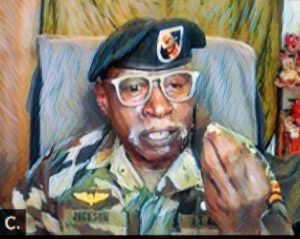 As he covered the globe on assignments in his 24 years of military service, it became increasingly clear to him that African Americans’ significant roles in the U.S. military to keep this country free were almost nonexistent.

Jackson felt compelled to correct this injustice. That quest led him to Union.

“I knew that if I was to be taken seriously as a historian and researcher, I needed a Ph.D. The doctoral degree conveys the greatest level of competence in your field of study,” Jackson said. “Union’s focus on interdisciplinary study offered the opportunity to expand and deepen my knowledge and expertise in a way I didn’t know existed. At Union, I found the faculty to have the greatest level of competency. They pushed me to think creatively and analytically. It has been one of the great experiences of my life.

The intersection of social justice with the curriculum prepared me to tell the untold story of African Americans in the U.S. Military. I can now present the story in a research-based and factual way that others cannot dispute.”

Jackson’s dissertation “In Military Service To A Country That Does Not Love You Back – A Memoir” compares and contrasts his military service with that of the Black soldiers of the United States Colored Troop (USCT) of the American Civil War. Jackson examined the prejudices that they faced, which still existed when he entered military service.

“For example, when I earned my paratrooper wings, I knew nothing of the existence of the 555th Parachute Infantry Battalion. They were the first and only all-African American parachute infantry battalion in the U.S. Army,” Jackson said. “I knew nothing of their contribution until I approached retirement. In the Spanish American War, the Black troops of the 10th Calvary, known as the Buffalo soldiers, saved the Rough Riders on several different occasions. During the Civil War, Black soldiers wanted to fight as well as gain an education. My research uncovered that two items, aside from their military equipment, usually found on a Union Black soldier, were a bible and a speller. This tells us that reading and education were very important.”

Jackson will use his Union degree pay homage to the past by going on the lecture circuit with his presentation, “African American Military History,” covering the American Revolution, the War of 1812, the Civil War, Buffalo Soldiers’ history, and the Buffalo Soldiers in Cuba, WWI, WWII, and the Korean War.

“I especially want ROTC students to know this history. It is important, as they become officers, to have this knowledge. I am also anxious to speak to history classes and hopefully to museum audiences.”

“As an Airborne qualified, Ranger-qualified and Special Forces (Green Beret) qualified veteran, the telling of this history is vital. Racism kept African Americans relegated to menial jobs in the military for decades, but thanks to my heroes of the 555th Parachute Infantry Battalion and the 2nd Ranger Company, who fought in the Korean War, the door to Special Operations (Spec Ops) was opened to Blacks. The men and women who served before me paid the dues for my career. I owe it to them to tell their story. All veterans and the public need to know the role African Americans have played, starting with the American Revolution and continuing to the present. I resent the fact that textbooks do not share this important history.”

Because of his studies at Union, Jackson is fully prepared to take this battle on.

“I am ready to right the injustice of the omission of African American history in the U.S. military. I truly hope to make a difference for all people, especially those of African American descent. They can hold their heads high and proudly proclaim the heritage of the Black soldier.”