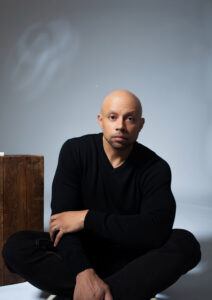 Maurice L. Harris, known professionally as Ionne, believes a world that works for everyone is possible. The marketing specialist, musician, entrepreneur, and educator, strives to emulate Dr. King’s belief that all people have human value and dignity.

In his new album, For Those Who Remain, Ionne explores positive social change through music, with a call to action to look at the root causes of systemic racism and inequities.

The Union 2019 Ph.D. graduate in Interdisciplinary Studies with a major in Ethical & Creative Leadership, and a certificate in Dr. Martin Luther King Jr. Studies Specialization, has a goal in mind with the songs.

“I ask people to not only look at incidents but also at the root causes, and what our role in changing systems looks like,” Ionne said. “Many of the lyrics originated with my own concerns around the ever-growing fascination with a mission to Mars and the subtext that living on another planet might offer an escape from social and environmental problems. Who would be left behind? The poor and people of color?

“Combating racism for me includes racial healing and reconciliation. We need an urgent commitment to social change that recognizes our shared humanity. The conversations that happen within and between the songs are real-life examples of people meeting each other where they are and thinking critically about possible futures.”

His creative Union dissertation on popular music as a tool for leading positive social change called The Garden based on The Fire Next Time by James Baldwin is serving him well.

“My studies at Union had and have a tremendous effect on my approach to music. When I was early in my music career, I realized that art was a way of making meaning of the world. Leadership scholars call this ‘framing.’ As an artist who engages in framing, I assume a leadership role through the intentionality of my musical works.”

In addition to the influence of Dr. King, he has leveraged the work of science-fiction novelist Octavia Butler and the Theory U change management method.

“I do believe we can achieve a world that works for everyone.”

Visit For Those Who Remain to listen to the songs on the album described as a heart-rending configuration of synth-pop, hip-hop, dance music.

Maurice L. Harris, professionally known as Ionne, is the Director of Marketing & Communications at the Schwarzman Center at Yale University. Prior to his work at Yale, he served as diocesan communications minister for the Episcopal Church in Vermont (the Episcopal Diocese of Vermont), responsible for marketing, communications, and media relations, and co-facilitated the diocese’s Racial, Reconciliation & Racial Healing Network.

He has written original compositions for Guiding Light, Another World, As the World Turns, and MTV’s Making the Video television series, as well as gold and multi-platinum records, remixes, and collaborations over the years with major and independent recording artists Grace Jones, Pocket Size, Blessid Union of Souls, LaKiesha Berri, Jennifer Fouche’, and Grammy-nominated guitarist Rod Harris, Jr., and more.

He is an incubating artist at Midnight Oil Collective and co-president at 5015 Records.

You too can make a difference in this world with a degree from Union Institute & University. Visit myunion.edu to start your new career.