In the Line of Duty

The award honors the memory of Sergeant Dunakin, a UI&U student who tragically lost his life in 2009, at the age of 40, when he and three other Oakland police officers were killed in the line of duty. The award was established by the university to honor his memory and those of other UI&U students and alumni who risk their lives every day. The award is presented to new graduates of the UI&U Criminal Justice Management major who serve in law enforcement and who emulate Sergeant Dunakin’s commitment to community service, academic success, and enthusiasm for Union’s Criminal Justice Management major.

Mason is a 23-year veteran of the LAPD and was nominated by the Los Angeles Academic Center. She is currently assigned as the Officer-in-Charge of the Operations-South Bureau Homeless Outreach and Proactive Engagement Unit (HOPE) unit. The HOPE unit works with homeless individuals and community stakeholders and coordinates with the Unified Homeless Response Center to make a positive impact with resources and fundamental services.

Mason strives to make a difference. “I listen to the homeless person and work to build that individual’s trust. Often that person has lost faith. Too often the person is mentally ill or addicted to narcotics. There is a lot of work to be done to solve the homeless problem, but I am committed to helping.”

Before her assignment to the HOPE unit, Mason was a sexual assault detective for five years.  “Working with sexual assault victims is vital work in society and not easy to do. The job requires you to be victim-impactful. It is not easy for a person to report an assault. But it is satisfying to take a predator out of the community and off the streets for everyone’s safety.”

Mason has been honored with 108 commendations for service to her department and the communities that she serves. In 2018, she was awarded the LAPD Police Star and Life Saving Medal for her quick action to save the life of a man who had doused himself with lighter fluid. She was able to diffuse the situation, save his life, and assist him in receiving the mental health treatment he needed.

She experienced a difficult situation in 2017 when she was present as a fan at the Route 91 Las Vegas Concert when a gunman fired upon the crowd, killing 60 and wounding 411. “I decided the best course of action was to help anyone and everyone I could. I have since spoken to a few victims and built life relationships with them. I would do it again; you never know when you are going to be needed in life.”

“I am grateful to do this job and help people,” said Mason. “I am also humbled to receive the Mark Dunakin Award.”

Detective James Tidwell is a 14-year law enforcement veteran with the Sacramento County Sheriff Department and was nominated by the Sacramento Academic Center.  He loves giving back to his community and acknowledges he could have ended up on the wrong side of the law. 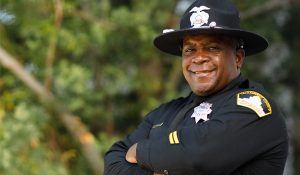 “I grew up in a drug-infested and crime-ridden neighborhood of Oakland and experienced bad policing. I could have ended up in a gang. It was the School Resource Officers in my school who showed me what good policing was. They had a huge impact on me. They cared and encouraged me. Because of them, I saw another path. I thought I would go into law but because of their influence, I chose the law enforcement profession,” said Tidwell.

Tidwell says the best part of his job is helping people. “I love what I do. Often when I am called to a scene, I find a state of panic. When I can turn a situation from doom to good for that person, it is very satisfying.”

Tidwell acknowledges the challenges of the profession. “The job is never boring. I wear many hats. One day I am a counselor or a father figure or trying to help find a support system for those in need. The hardest part of the job is the split second decisions that have to be made.”

He is especially touched to receive the Mark Dunakin award, especially because he grew up in Oakland. “Receiving this award makes me want to contribute more to the community. I will always be honored to be part of this legacy.”

Union Institute & University’s faculty and administration commends Sergeant/Detective Marya Mason and Detective James Tidwell for their public service and commitment to fulfill Union’s beloved mission to engage, enlighten, and empower others to a life of service and social responsibility.

Today is the day to explore how a Union degree can change your career path. Click here to learn more.